I envisioned fighting zombies or chaotic masses when our govt finally chokes us out by spending us into oblivion. Food, shelter, water and ammo were the plan to keep us out of harms way for a little while. Instead we were hit from inside the walls of our fortress. It only took friggin pantry bugs and a faulty compressor to smoke us out.

The first attack was from buying something from the store that had some type of pantry beetle in it. We don’t use much packaged stuff but I had stocked up over the years on beans, rice, pasta etc… We hadn’t opened the pantry in weeks so when we did we found a full on infestation of the little critters. We had to throw away everything (12 trash bags). We bought some containers and started reloading on our dry goods so we have a plan to avoid that issue in the future.

Yesterday we woke up and our fridge was kaput. Pulled it out, took it apart and by using youtube I was able to diagnose two possible issues. Replacing the relay and capacitor seemed doable but the compressor was out of the question. After several phone calls and appliance part stores I finally found the part in stock. I had to rewire some things because the replacement part wasn’t identical. Plugged it in and it seem to be working but then I heard the click and felt the compressor and it was too warm. Damn.. it was the compressor so I am on a waiting list to get it repaired.

All this to say, my posts might be light this week. 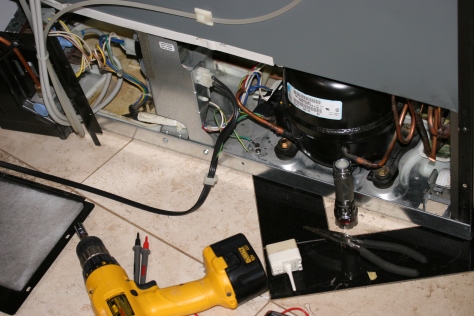