Jill caught a cold the other week and was all stuffed up with a sore throat etc… She likes shrimp so I decided to whip up a really spicy warm bowl of soup to sooth her throat and open her up. So I decided on a ramen based Thai soup where I could kick up the curry and Sriracha to do the trick.

I found a soup on Damn Delicious and decided to use that as my base recipe. Chungha’s blog is great with simple ingredients and great photography. She is worth a click to check out.

This soup really turned out perfectly. The balance of heat with the subtle smoothness of the coconut milk made for the perfect base. If you don’t enjoy curry or even shrimp you could still make this and sub in some tomato paste and another protein.

Get your slurp on.

Directions:
1. In a pot on medium heat add your butter, onion and red pepper and saute until tender. Add your garlic and ginger, stir for one minute. Add your coconut milk, stock, fish sauce, red curry paste, sriracha. Bring to a simmer and taste. Adjust seasoning accordingly.

2. Right before you are ready to serve it add your shrimp and ramen. This will cook really quickly, like 3 minutes quick. Remove from heat and serve with cilantro. 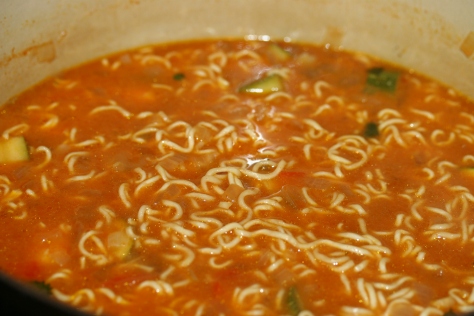 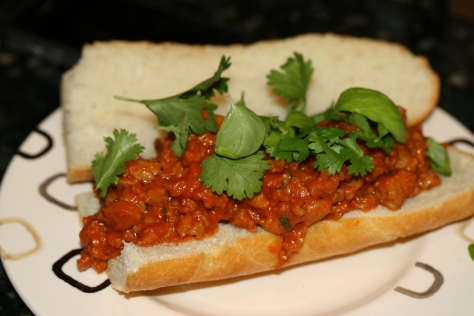 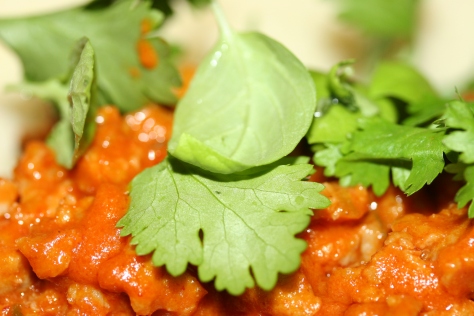 3″ />a>
I spotted this Martha Stewart recipe for a simply but unique Sloppy Bao Sandwich that looked pretty interesting when trying to scratch that sandwich itch. I have mentioned it various times that I have some sort of gene for Asian/Eastern food. I just love their balance of spice, sweet and tangy.

Think of a sloppy joe with a “hmmm” factor to it. The punch of basil through that meaty savory slop with the chew of the bread is a perfect bite. I think I would adjust the ketchup and dijon mustard down a notch. I totally get using mustard and ketchup in BBQ sauces or on burgers and dogs but I thought they elbowed their way to the front versus harmonizing with the rest. It’s used to speed it up but I think I would have pulled them down and added tomato paste to replace some of the sweet with savory. All that said, it’s’ a good and fun sandwich.

Directions:
1. Super easy. In a skillet on medium heat add your protein and onion and cook until browned. Then add the garlic and let it cook for one minute before adding the rest of the ingredients and stir until combined. Turn to low and let this simmer stirring occasionally for about 15 minutes.

2. Split and toast the baguette for about two or three minutes. Fill your baguette with your meat mixture and top with jalapeno, cilantro, basil or even some cabbage. Enjoy. 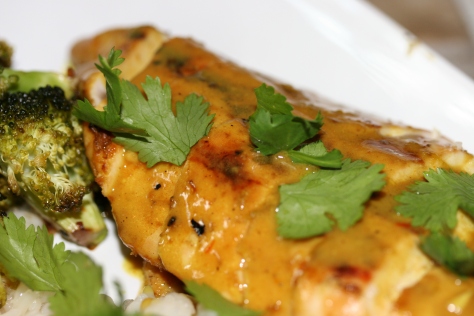 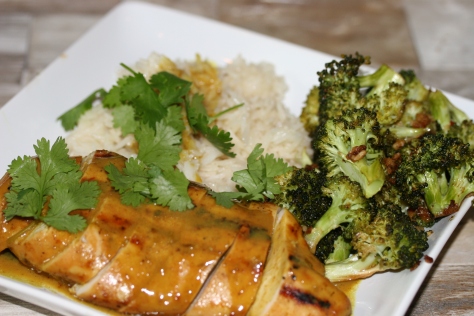 No surprise but I need to lose a little weight so you are going to get more waistband friendly recipes. I am not going strict clean/paleo or anything but more like weight watchers. It should be no surprise that more chicken, fish and veggies will be making the plate until I can button my pants with less effort.

I love green curry dishes that have that silky coconut milk with layers of green curry and vegetables. So when I saw a recipe for Coconut Lime Chicken it made me think of green curry. And when I read the ingredients, I spotted curry….sold! It doesn’t really taste anything like you might taste in a typical Thai green curry dish. The chicken is super moist and the sauce reduction helps carry that flavor to the rice. I also roasted up some broccoli as a side and used a little soy sauce and red chili flakes to flavor it.

Directions:
1. Super easy. Make your marinade by mixing it all in a bag and add your chicken breasts. Marinate it overnight or at least for several hours.

2. Heat up your grill and grill pan to a medium high heat (300-400). Remove the chicken from the marinade and shake off the excess sauce/marinade. 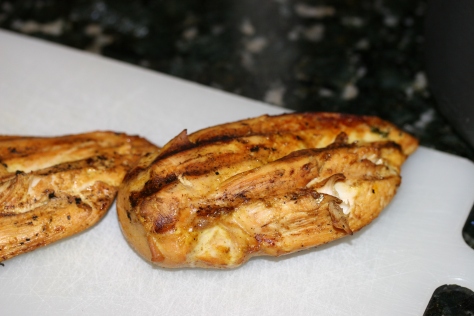 3. Take the marinade and sauce and put it in a small pan and heat to a simmer. This can freak some people out but by getting it a boil and letting it simmer will kill the bacteria. 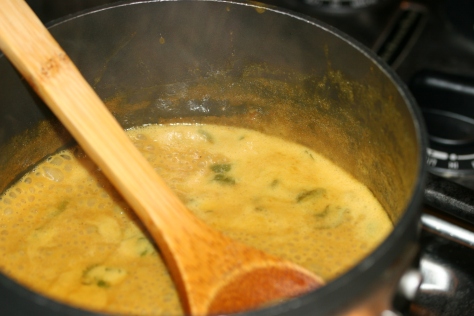 4. Preheat your oven to 350. Cut your Broccoli into bite sized pieces. Sprinkle a little soy sauce on them along with red chili flakes. Roast them for about 20 minutes while your chicken is grilling.

5. While your chicken is resting after it is cooked. Make your 90 minute rice in the microwave I cut the chicken and then poured the sauce over the rice and chicken. I garnished with cilantro. 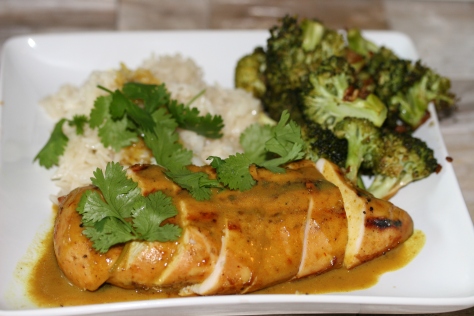 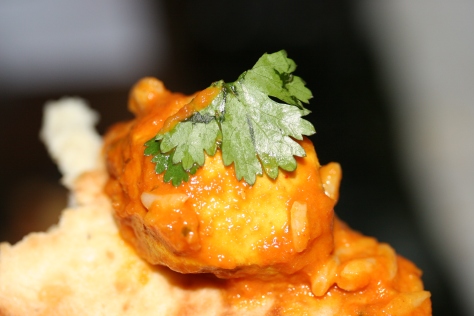 There are many meals that I want to “master” or perfect. Chicken Tikka Masala is one of those. I’ve had a few that would unquestionably show up on my death row last meal menu. I just love all the things going on in a good one. It’s like a complicated Indian inspired pasta sauce. Burts of tart, tang, smoke and of course that beautiful slow heat make it irresistible to me.

For those who claim that they don’t like Indian food or “curry”, this dish can actually be 100% absent of actual curry. Mine has some but not that much. You should try it if you have never had it.

My last attempt at it was largely from Aarti’s recipe (foodnetwork) and it was really good but I can’t help to search on ways to improve or at least put my twist on the dish. So this time I pulled about four recipes that were highly rated. I highlighted ingredients that were absent from the other recipes and also circled the ones that were the same. My strategy was to create a base of ingredients and techniques that were consistent and then add to them unique ones from the other ones.

This turned out super. The use of lemon really really punched up the tang and gave it a brightness. Also the brine and broil on the chicken was most excellent. Most definitely will that be included in my technique going forward.

Directions:
1. Make your spice mix and create your brine in a large zip-locked bag. Trim and cut your chicken into bite-sized pieces and add them to the bag and let it marinate for at least 3hrs. Better over night. 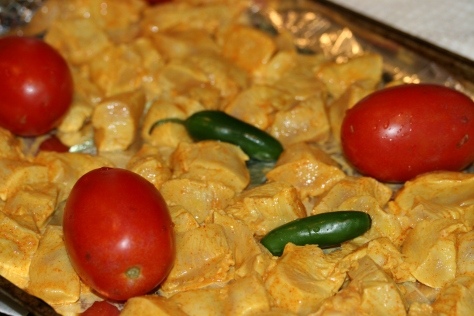 2. When ready make the dish, preheat your oven on broil. Line a sheet pan with foil. Remove your chicken from the marinade and pat it dry as you can. Place it on the sheet pan along with your Roma Tomatoes, Serranos and broil until there is a char. I first put my pan on a lower rack (10mins) , removed any liquid, and put it up on the top rack and watched it until there were some charred ends. When done remove and set aside until time to add to your sauce.

3. Sauce. While my chicken was cooking, I started on the sauce by melting my ghee in a large pot (medium heat) and cooking my onions. I minced the ginger and garlic into a paste and added it for a minute or so. Now I added the remaining four tbs of the spice mix to “bloom”. Stir for about a minute. Now add your tomato sauce/puree and turn it to low and let it simmer and reduce for 30mins. I then added the roasted serranos and rough chopped Roma tomatoes and about 1/2 a bunch of rough chopped cilantro. Cook on low for another 30 minutes.

4. Now remove from the stove and let it cool a bit. CAREFULLY pour into a blender. I have a variable speed blender and I turned it on the lowest setting with no lid. If you lid the mixture and blend while it’s hot you will have a mess on our hands not to mention some burns. I was able to slowly blend this mixture until smooth.

5. Pour the mixture back into the pot on the stove and warm it up to eating temperature. Add your chicken. Let it simmer for another 30 minutes or so. Remove from heat. Now stir in your cup of heavy cream. Taste. At this point you can add extra spices, juice of one lemon, and/or tomato paste to finish it off. I did the lemon and tomato paste. Serve with Naan bread and over rice with some fresh cilantro. 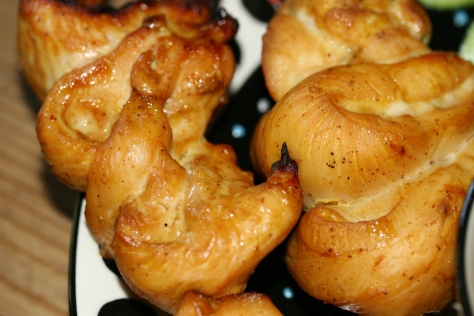 >
I’ve only used my homemade tandoor oven once so felt the need to tempt the bumper crop of mosquitoes with my sugary blood and fire it up for some Thai chicken satay. Each week I have to devote one dinner to get my fill of Indian, Thai or Korean food. Since the Tandoor needs a skewered meat, I settled on a chicken satay with spicy peanut sauce, cucumbers and smashed potatoes with Za’tar seasoning.

For the tandoor I bought some “long as your leg” skewers that don’t quite work elegantly with my oven so I am excited to try a new technique of hanging the skewers vertically. That puppy is getting up to 700 degrees hot which is in green egg territory but cost me only about 60 bucks to make. Man fire meat beer whiskey….oh an Thai food with 300 of your closest blood sucking friend.

This recipe was adapted from RasaMalaysia

Directions:
1. Should you make the potatoes add them in to a pot of salty water with Zatar seasoning and cook until tender. Transfer them to a baking sheet and smash them with the base of a glass. Cover with olive oil and Zatar and bake in a 400 degree over until crispy (20 minutes) 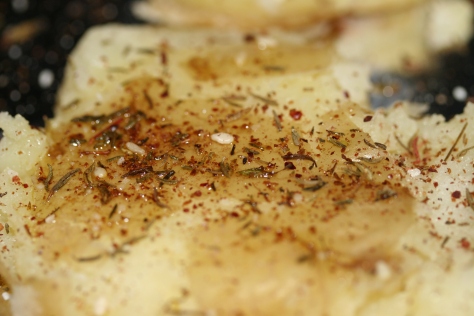 2. Cut your chicken into bite sized pieces and add them to the marinade and let it do it’s work for at least 2 hours and better yet overnight.

3. Make your peanut sauce by adding all the ingredients except for the peanuts and cook in sauce pan until smooth and thickened. Ten minutes should do it and keep the temp on low. Let it cool and then add the crushed peanuts .

4. For the chicken skewer them up and grill them or use your homemade tandoor oven. Weekend project….. just saying. Cook until the chicken is done (165 degrees).

5. Serve with your side of sauce and cucumbers and your potatoes. Enjoy with your favorite beer or whiskey. BTW had a Flagstaff beer out of NY the other night. It’s a great lager with a nice pungent finish similar to Heineken. 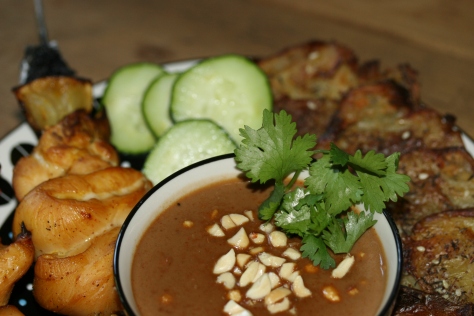