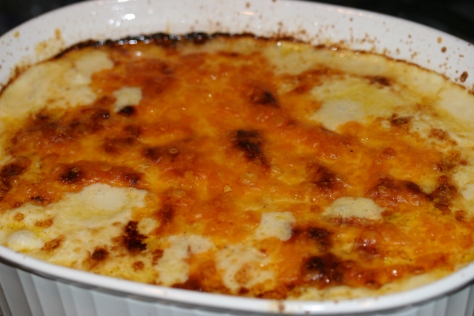 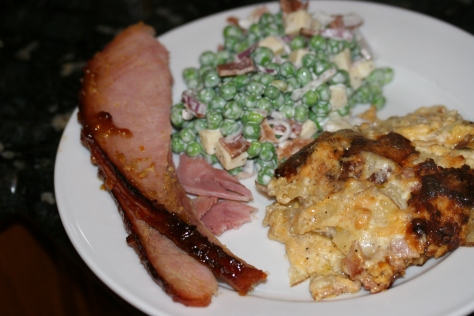 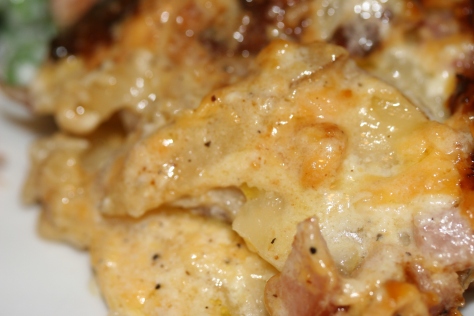 When working on the Easter menu, I have to include potatoes with my ham. When I cook a ham I have a ton of leftovers so decided to incorporate some into my scalloped potatoes. My favorite potato is the twiced-baked because I love the skin. That said, sometimes the mashed or scalloped seems more appropriate for certain dishes. Given that scallop potatoes uses milk/cream they tend to have a kiss of sweetness over a twiced-baked.

For some reason, which makes no sense to me, cooking scalloped potatoes is always tricky. It seems like mine require an extra 20-30 minutes to get to the tenderness I prefer. We pulled them out and had to put them in for another 30mins. Luckily the Pea Salad and Ham aren’t served hot. But if you like a tender tater like us take note and leave a time cushion just in case. These are lava hot out of the oven so letting them rest is okay if you finish a little early.

Directions:
This a three part recipe.
1. Dice your onions and ham and put them in a medium heated skillet to sweat and brown. Use a little butter or oil if you need to keep it from burning or sticking. Set aside.

2. Grate your cheddar while onions and ham are cooking. 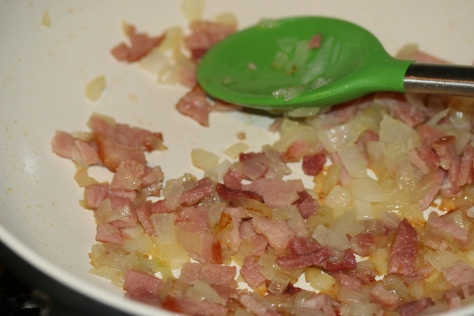 3. Cut the potatoes using a mandolin. If you dont have one consider buying one or just making a mashed potato using these ingredients. If you go the mashed route I would cube and boil them and then add the bechamel, cheese, onions and ham once the water is drained.

4. In a sauce pan make a roux by melting butter on medium heat. Add the flour and whisk for a minute or two. Pour the cream and half and half in a glass measuring cup and heat it in the microwave for 30 seconds. Then slowly pour it into the roux. Add the Parmesan, sour cream and seasonings.

5. Assemble your dish by first buttering the bottom. You are going to make three layers and build it like a lasagna. So divide everything into thirds. First the potatoes, then ham and onions followed by the sauce and finally a layer of cheese. Do this three times.

6. Cover with foil and bake this in a 350 degree oven for 1hr. Remove the foil and let the cheese brown for about 20 more minutes. Use a spoon, fork or knife to push to the bottom and feel the firmness of the potatoes. If there is any resistance cover and put them back in the oven until the potatoes are tender.

When I see “best” on any recipe, I am torn between “yeah right” and intrigue. I mean what if it really is the best ever? What if I miss out? So I was on Yummly trolling for some recipe ideas the other day and spotted the “best buttermilk pancakes” posted by the Smitten Kitchen. While I wasn’t looking for pancakes I did know I was going to make some for Jill on the weekend so decided to give it a try.

For some reason pancakes recipes all are very similar but yet these special differences make people peacock over “their” recipe. These are good pancakes no doubt. They are somewhat fluffy vs chewy or dense. I added some blueberries and a little lemon zest and the flavor was bright. Like Spring in your mouth. Solid pancake base recipe. 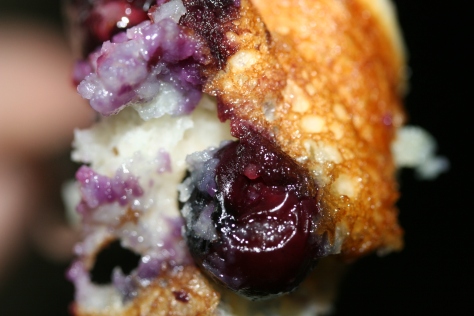 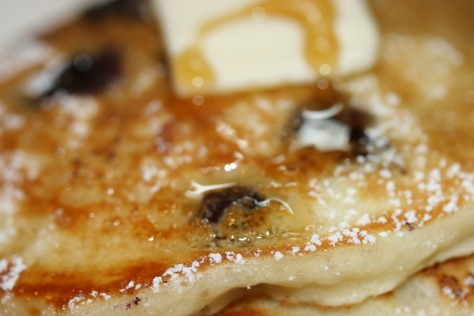 Directions:
1. Pour your dry ingredients into a mixing bowl and mix well. Sift if you must.

2. Add your wet ingredients and mix well. Set aside for 20 minutes or to let the baking soda and powder do their thing.

3. Right before putting them on the griddle fold in your fresh blueberries and lemon zest.

4. Using a large (sprayed) cookie scoop place each cake on the griddle that is medium low heat blessed with butter.
Depending upon the heat watch for bubbles and the edges to turn light brown before the flip. Flip with confidence…one fluid motion. 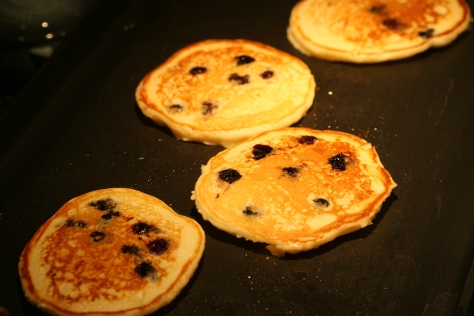 Enjoy with coffee, tea, OJ, milk or a protein.
Caution: If you are serving these to kiddos, please be aware that the blueberries get really hot on the inside. I would let them sit for a few minutes. I know we all like “hot” cakes but those blueberries might burn some little hungry mouths. 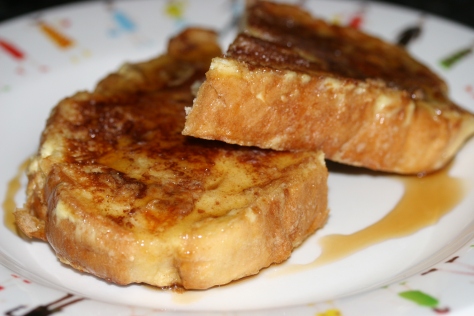 Growing up my Mom always gave us a proper send of breakfast. Four kids can run through a lot of food. It seemed liked toast always made the plate in three forms: butter, cheese or cinnamon. I can picture the pan of 8 slices of toast in her oven.

It was a toss up for me cheese toast with the american cheese that just started to turn black with that big bubble housing the gooey cheese. The other winner was her cinnamon toast. Slathered in too much butter with a cinnamon sugar mixture. When the ratios worked out you would get this crunchy cinnamon sugar shell with the buttery under tones. I loved the stuff.

I’ve been traveling a ton and just returned from a ridiculously long trip. It snowed in Dallas and I could tell Jill’s treads were a little worn so we prepared for a weekend inside. Jill loves breakfasts and in particular french toast, pancakes, muffins etc.. As I was leaving she was getting sick and stocked up on a few items. She had purchased a sourdough round but didn’t eat much of it and I noticed it was hard a brick which is perfect for French Toast. I was thinking of trying a cinnamon toast french toast. Crunchy on the outside and creamy and soft on the inside. See that crusty exterior?

Jill said it was the best French Toast she has ever had. It was pretty darn good. Every time I make something I immediately think how to tweak it for next time. This one needed no tweaks. Set aside some extra treadmill time in the afternoon.

Directions:
1. Take a glass dish and crack the eggs in it (saves you from washing a bowl). Tilt it to one side and whisk the eggs well. Pour in your milk, cream, orange juice, vanilla, and salt.

2. Lay your toast in the mixture and turn it over. Cover the top with plastic wrap and put it in the fridge. You can let it soak over night if you wanted. Turn it when you walk by it to make sure it’s coated well on both sides.

3. Right before you are ready to cook it. Mix together a sugar and cinnamon mixture. I used probably 2 tbs of sugar and about 1.5 tbs of cinnamon. Mine is good when it looks like the picture below.

4. Remove the plastic wrap and sprinkle the sugar cinnamon mixture on top. In medium heated nonstick pan or griddle melt a pat of butter and put the cinnamon sugar side down. 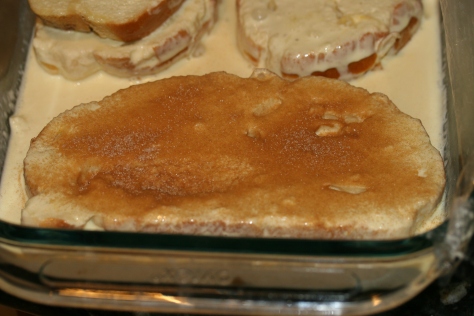 5. While that side is cooking sprinkle the naked sides with the cinnamon sugar. When you get a nice crust of caramelized sugar and cinnamon, flip to the other side.

Serve with powdered sugar and/or a little maple syrup. 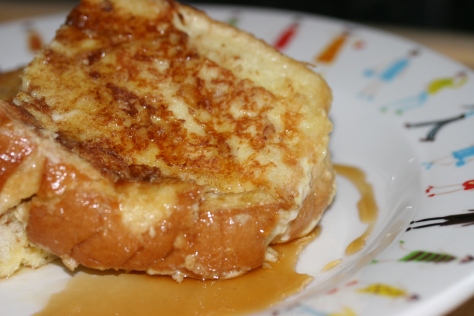