Last night was Taco Tuesday in our house. Which really means we are cooking something Mexican / Tex-Mex or something in a shell or tortilla. I have been trying to bump up the vegetable ratios in my dishes without tripping Jill’s food wires. As she admits her palate is that of a teenage boy. And when you make something with chicken it will be scrutinized heavily. So I was trying to figure what to make and thought I would go the enchilada route because you really can’t see what is in it as easily as you can a taco.

What was unique with these chicken enchiladas was the filling. It had a 4 to 1 ratio of veggies to chicken. Most enchiladas around here are basically chicken only or an occasional onion or pepper. I was going for the Chipotle or Freebirds style burrito in an enchilada form. For the sauce, I hid some avocado in there and covered it up with fresh cilantro, jalapeno, sour cream and buttermilk for some extra tang. You can put whatever you want in yours and you can adjust your sauce the way you want but here is what I did….

Directions:
Prep sucks for me, but it really is what pays off when pulling any meal together. So get chopping. For the filling, you are going to make your rice (stove top / or microwave) and your beans (fresh or canned). Dice the cilantro for the filling. Roast your corn…I did mine over the fire of my burner until blackened and then sliced the kernels off.
The last part of the prep is your chicken. I poached mine in a beer and can of fire roasted tomatoes and let that simmer for about 30mins.

1. Okay, let’s get to cooking. Preheat your oven to 350.
2. Let’s make the sauce first by blending together the cored jalapenos, cilantro, sour cream, and buttermilk. Taste and add salt as needed. It should be smooth and pale green in color.
3. In a sauce pan make a rue by melting butter and flour until light brown. Turn down the heat or turn it off and add the sauce and stir until it thickens up a bit. Set aside.
4. Let’s make the filling by cutting up your cooled chicken into small pieces. You should also have cooled beans, rice, and corn. I diced up the second half of my avocado, cut kernels, and pickled jalapenos. In a large bowl, I added the second cup of sour cream, a small can of diced green chili sauce and then stirred everything together. Taste it and season per your taste buds.
5. Take a 9 x 13 dish and put some of the sauce on the bottom. Thin layer. Take your tortillas and fill them up and then fold them over into an enchilada and lay them down in the sauced dish seem down. When done, spoon the sauce over the top of the enchiladas until mostly coated. Top with Mont Jack cheese and jalapenos and bake for about 20 mins. It’s all cooked at this point so you are baking to heat through and for a little color from the cheese browning. 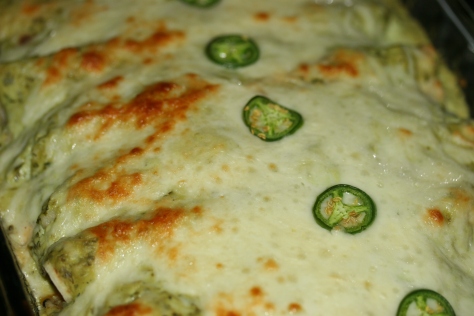